As far as we’re concerned, there’s no “been there, done that” when it comes to Malta and blockchain. Things just keep getting more exciting.

Sure, we were just there in May, where CMO Yael Tamar got to join an international panel of judges in an STO battle supreme. But the twice-yearly summit just keeps getting better and better, so we’re heading back from November 4 to 8 for yet another incredible Malta AI & Blockchain Summit.

This one promises to bring together thousands of investors and innovators in blockchain, AI, quantum tech, big data and – one of our favorite future-friendly blockchain use cases, IoT (Internet of Things).

This time, Yael will be speaking first about the democratization of real estate. That’s something we’re passionate about here at SolidBlock, with the goal of bringing investors and asset owners closer to a reality where investing in real estate anywhere in the world is as easy as online banking – or easier.

Next up, she’ll be talking about “Lifting the Lid on the Pandora’s Box of Digital Currencies,” and wow – what a topic that promises to be. Traditional finance models are crumbling with the broadening acceptance of digital currencies – hence the Pandora’s box. Governments, who have had a monopoly on currencies up until recently, are increasingly aware of these developments. But which will be first to peek inside Pandora’s box?

But however great SolidBlock’s message, there’s somebody else stealing our thunder this time around.

This conference is making headlines because it will headline Akon, the Grammy-winning American and Senegalese hip-hop superstar and one of Africa’s most renowned philanthropists.

Back in February, Akon launched his own cryptocurrency, believing, as he told Newsweek, that “blockchain and crypto could be the savior for Africa in many ways… it brings the power back to the people.”

Even without international music superstars, the Malta AI & Blockchain Summit is one of the most massive and influential blockchain events, bringing brings together fintech pros and influencers for panels, lectures, workshops and more.

Besides the STO Battle Yael helped judge at the last conference, previous events have included a hackathon with big prize money. Typically, each conference brings in almost 8,500 participants, including over 5,500 delegates and hundreds of exhibitors, startups and – of course – investors eager to discover the Next Big Thing for blockchain.

The summit’s founder and CEO recently commented about the star’s appearance at the next conference, “Akon is sure to be a huge draw for the conference audience at November’s Malta AIBC.”

Hopefully we won’t be too busy shaking hands, making connections, and signing deals to get an autograph or two for all our friends and family back home!

Blog: Come deep diving with us in Zurich – and online 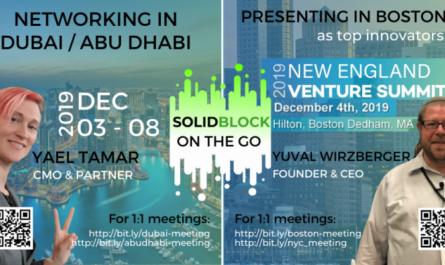